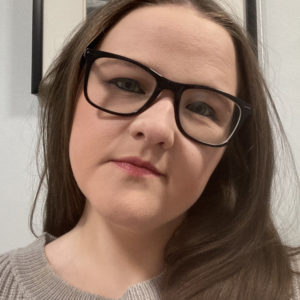 Jessica is a freelance entertainment writer who has also been published on sites such as GameRant, KeenGamer, and WhatCulture. Although she dabbles in many types of articles like News, Reviews, and Listicles, she has a genuine love for writing Guides. She thought about consulting a doctor about this rare phenomenon, but as it seems to be benefitting her career, she thinks she'll put the appointment off for a bit.

Although she speaks fluent American (howdy y'all) Jessica is actually from Northern Ireland. Timezone differences don't bother her much, as she's usually staying up all night to scream at a horror movie, or scream at Fortnite and Pokemon Unite. Her love of horror and video games meet in the middle with her obsession for the Resident Evil franchise. She even speedran Resident Evil 2 Remake for a while. Other mainstream video game favorites of Jessica's include Alan Wake, Dead Space, Final Fantasy VIII, Jak II, Knights of the Old Republic, and TimeSplitters: Future Perfect.

In between freelancing and stressing over her gaming backlog, Jessica is studying part-time for a degree in English and History. She also writes short stories when she gets the chance, and has even had a few published in print and online. When not clacking at a keyboard or blaming the controller for her character's death, Jessica loves searching for her next favorite podcast, reading a Stephen King novel, and being followed around by her housemate's dog.

How to Crouch in Fortnite
Crouching is required to complete certain challenges in Fortnite, but it also provides a tactical advantage. Here's how.

What Does PR Mean in Fortnite?
Fortnite can be a casual or hardcore experience, with PR serving as one way to show how serious you are about winning. But what does PR mean?

How to Sit Out in Fortnite
Everyone needs a break. If you need to stop playing for a short while, sitting out is far more convenient than leaving and rejoining a party.

How to Sprint in Fortnite
Fortnite can be a tense battle royale. Knowing how to sprint can be the difference between winning or losing a match.

How to Turn On Instant Reload in Fortnite
Although the instant reload setting can only be used in Fortnite Creative Mode, it's an incredibly useful option and will save you a lot of time.

How to Get the Venom Skin in Fortnite
Fortnite has so many cosmetic items available, and one of the popular skins is Venom. Here's what you need to know about getting the skin.
Login