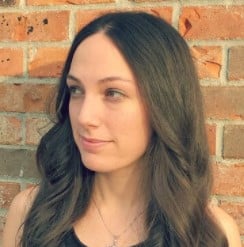 Carley Garcia began learning Japanese at the age of six, and the rest is history. In May 2020, she joined the Otaquest team, specializing in lesser-known aspects of Japanese pop culture, rambling about retro games, forgotten anime series, and Tokyo’s indie musicians in her first official paid gig as a staff writer. Since then, she’s continued sharing her love for gaming and honing her writing skills by contributing hundreds of articles to sites such as Siliconera and Gameranx.

Utterly obsessed with gaming, anime, and manga for the past 25 years, Carley grew up in Dunedin, Florida. Attending Florida State University, she graduated with a degree in Japanese in 2012 and immediately moved to Kashiwazaki, Japan as a JET Program participant. Realizing quickly that teaching small children was a much too harrowing experience for her introverted self, she moved to Tokyo in 2013, working as an editor and translator for a financial company in Ginza and wearing a suit every day like a grown-up.

Eventually, Carley remembered that she was engaged. She moved back to the states to marry that neat guy in 2015. Since then, she and her husband have lived in South Carolina, Oregon, Mississippi, Pennsylvania, and Iowa. She returns to Japan as often as humanly possible.

During her decade-long career as a translator, Carley has worked on everything from manga to medical dictionaries, with the former being much more enjoyable. Her first “I made it” moment came when she worked alongside Emmy Award-winning director Leo Eaton on the documentary series Sacred Journeys. She translated a number of high-profile interviews for the 2020 Otaquest CONNECT online event, including those from famed composer Yoko Kanno, voice actor Mamoru Miyano, and SEGA’s Toshihiro Nagoshi.

Carley spends her free time gaming with her husband, scoping out breweries and wineries, writing self-indulgent fanfiction, and doing freelance translations for fun. Her favorite food is foie gras and her favorite drink is scotch.

She prefers lore-heavy RPGs and walking sims and has played Dragon Age: Inquisition 13 times. Her favorite Final Fantasy title is all of them.

Is Stardew Valley Cross-Platform?
Stardew Valley has been a fan-favorite for almost seven years, but those wanting to play with friends will need to be careful.

Final Fantasy XIII: What a 5-star Rating Means in Battle
In Final Fantasy XIII, players are given a star rating after each battle ranging from 0 to 5. Why is it so important to aim for a high score?

Persona 4 Golden: Complete Classroom Answers Guide
Players in Persona 4 Golden are often called on in class and these general knowledge questions can prove to be a little on the tricky side.

The 30 Best Anime Series of the 90s
The 90s gave birth to some of the most iconic and inspiring series in anime, ranging from action-packed fantasy to heart-pounding romance.

The 16 Most Kawaii Anime Series
Kawaii culture has swept the world over the past few decades, and Japanese-style cuteness commonly appears in popular anime series.

What are Easter Eggs in Video Games?
Easter eggs are a legendary part of the gaming experience, but what does the phrase mean and how can you uncover them?

Cyberpunk 2077: How to Get Rebecca’s Shotgun
The Edgerunners Update for Cyberpunk 2077 added Rebecca's flashy pastel shotgun from the popular Netflix anime series.

Genshin Impact 3.0 Release Date Revealed Along With Banners
Details about the 3.0 update for Genshin Impact have finally been revealed, from the release date to banner and event information.

Sonic Frontiers “Won’t Be Delayed,” Will Appear at Gamescom
Sonic Frontiers will make its world premiere during Gamescom Opening Night Live, and Sega claims that the game will not be delayed.