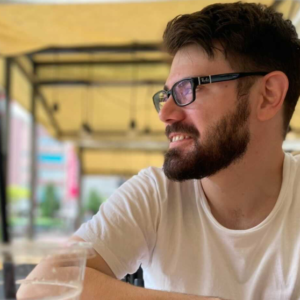 Marshall Gunnell is the mastermind behind VGKAMI and a dedicated tech and gaming expert. He dedicates a significant portion of his time to crafting insightful articles on these topics. His work has been featured on major outlets like Business Insider, PCWorld, How-To Geek, Zapier, and more. Over the past four years, his articles have been read by over 70 million people.

Marshall, a Mississippi native, currently calls Tokyo, Japan home, where he works as a Technical Writer at LINE Corp. When he's not on the clock, he can be found working hard on VGKAMI, breaking down complex subjects for the masses, mastering the Japanese language, sipping on budget-friendly whiskey, indulging in onsens, and trekking through Japan's picturesque mountains.

Prior to his current adventure, Marshall was based in Taipei, Taiwan, where he was Chief Marketing Officer (CMO) and a technical staff writer at StorageReview. He provided in-depth news coverage and detailed product reviews on storage arrays, hard drives, SSDs, and beyond. He also developed sales strategies based on regional and global market research to identify and generate new project initiatives. Before that, he could be found knee-deep in network storage devices, with his journey beginning with Synology.

Despite his tech background, Marshall's true passion has always been indulging in story-rich RPGs. As a kid, he spent countless hours crafting character bios, dialogue, weapons and item descriptions, and more for a game he was building on RPG Maker for the PS1. Once he completed a chapter, he'd even pen a walkthrough for it, the old-fashioned way, with pencil and paper.

His love for how-to journalism and gaming sparked the creation of VGKAMI, where he aims to deliver top-notch content for gamers of all levels.

He also thinks Final Fantasy IX is the best in the series and is willing to argue with you about it on Twitter.

FF7 Remake Intergrade: All Happy Turtle Flyer Locations
Old Snapper tasks Yuffie with finding all six Happy Turtle flyers hidden around the Sector 7 slums. Here's where you can find each one.

What Is K/D Ratio?
In first-person shooter games like Call of Duty or Fortnite, player performance is often measured using a key metric: the K/D ratio.

What Does NPC Mean?
From humble beginnings as mere video game extras, "NPCs" have become embroiled in political discourse and online controversy.

Complete Stardew Valley Museum Collection Guide
The Museum collection is initially empty. Gunther, the curator, wants your donations to complete it. Here's where to find everything.

Stardew Valley Calendar
The Calendar in Stardew Valley shows the current Day and Season, upcoming Festivals and weddings, and the birthdays of the villagers.

How to Make Decals in Roblox
Decals in Roblox are images that you can use on surfaces within the game. Uploading images for decals is quick and easy.

Inscryption: Clock Puzzle Solution
The clock houses a few useful items. one of which is necessary for your escape. Here's how to solve the clock puzzle.

Pokémon Scarlet & Violet: How to Rename Your Pokémon
If you're unhappy with the nickname or accidentally made a typo, you can change the Pokémon's name again later.

Pokémon Scarlet & Violet: How to Run
When you first start off in Pokémon Scarlet and Violet, your character will only be able to walk slowly without the ability to run.

The Forest: Complete Crafting Guide
Crafting is a necessary means to survival in The Forest. This complete guide will see that you don't succumb to enemies or the environment.

How to Use the Hidden Web Browser on Nintendo Switch
One major complaint about the Nintendo Switch is its lack of web-browsing capabilities. However, there's an unofficial workaround.

Harvestella: How Long is Each Season?
Harvestella has four seasons (excluding Quietus): spring, summer, autumn, and winter. Each season has the same number of days.

Harvestella: How to Save
Harvestella auto-saves your game data when you rest at night. However, there's also a way to manually save your game.

Harvestella: How to Craft the Hammer
The Hammer lets you break rocks, destroy processors and fences, and return soil to its original state. Here's how to craft one.

Stardew Valley: Complete Albacore Guide
Albacore are moderately difficult fish to catch in Stardew Valley, but are required for several quests. Here's what you need to know about Albacore.

Stardew Valley: Complete Walleye Guide
The Walleye is a common Fish that is fairly easy to catch in Stardew Valley. Here's everything there is to know about this freshwater fish.

Stardew Valley: Complete Catfish Guide
Catfish are difficult to catch, but they have many uses in Stardew Valley. Here's what you need to know about this fish found in streams.

Stardew Valley: Complete Eel Guide
The Eel is a difficult Fish to catch in Stardew Valley, but it's in high demand. Here's what you need to know about it.

Final Fantasy VII: How to Get Vincent
Vincent Valentine is an optional character in Final Fantasy VII that you can get by uncovering the secrets of the Shinra Mansion in Nibelheim.

Stardew Valley: How to Get a Horse
Getting a horse can drastically increase your daily efficiency in the valley. Here's what you need to do to get one and start riding.

Stardew Valley: How to Get Every Stardrop
A Stardrop is a rare fruit in Stardew Valley that permanently increases your maximum energy bar. Here's where you can find each one.

Stardew Valley: “Favorite Thing”, Explained
When you start a new file, you have to input your "Favorite Thing" during character creation. Here's the impact it has in-game.

Twitch: How to Create an Account
If you're ready to start streaming on Twitch, the first thing you'll need to do is create an account. It only takes a minute to get started.

How to Block Someone on Discord
If a user is harassing you on Discord, you can keep them from contacting you by blocking them on either the desktop or mobile app.

Cookie Clicker: All Cheats and How to Hack (Steam, PC, and Mac)
You can hack Cookie Clicker for Steam, as well as the browser version. Here's how, every cheat code, and what they all do.